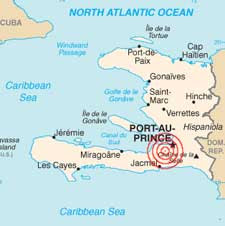 The devastating magnitude 7.0 quake that ripped through Haiti Tuesday January 12, 2010, reportedly killing thousands, did not catch everyone by surprise.

In an interview last week for an unrelated story, Robert Yeats, a professor emeritus in geoscience at Oregon State University in Corvallis and co-author of a June 1989 article for Scientific American "Hidden Earthquakes," said that an imminent big west coast earthquake concerned him far less than a "big one" that might occur in Haiti, due to the large fault near the capital city of Port-au-Prince—and the poverty-driven low level of earthquake-preparedness there. "If they have an earthquake on this fault that runs through Port-au-Prince," the death toll would be tremendous, he said January 6.