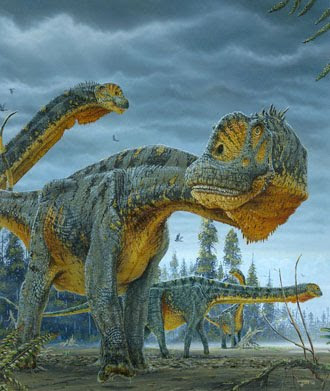 While you might have heard of Supersaurus, Seimosaurusor Argentinosaurus - and perhaps even Turiasaurusand Paralititan - have you heard of... Amphicoelias fragillimus? Though described as long ago as 1878, this sauropod has remained decidedly obscure and hardly heard of until pretty recently. Naish & Martill (2001), for example, stated 'What has recently been claimed as the biggest of all sauropods and, indeed, the biggest of all land animals, is actually a specimen discovered in 1878. Based only on a single enormous vertebra, now lost, Amphicoelias fragillimus has been estimated to have reached a length of 60 m and may have attained a weight of 150 tons!' (p. 230). If these estimates are valid, then this animal was twice as long as Supersaurus andDiplodocus, and perhaps over four times heavier.
Err, gosh.
In August 1878 the famous and prolific scientist* Edward Drinker Cope (1840-1897), described a new super-sauropod, Amphicoelias fragillimus, from the Garden Park quarries of the Morrison Formation of Colorado. It was represented only by an incomplete dorsal vertebra and the distal end of a femur (contra Naish & Martill above: whoops!). A good drawing of the vertebra was provided (Cope 1878), showing that this sauropod was clearly a diplodocoid: a member of the same sauropod clade as Diplodocus, Apatosaurus and their relatives (the name Diplodocimorpha is also sometimes used for these animals: see Taylor & Naish 2005: free pdf). The big deal is how, err, big these remains were. The partial vertebra had a preserved height of 1.5 m and, when reconstructed on the basis of comparison with complete diplodocoid vertebrae, has a total height of 2.7 m. Again... gosh (or words to that effect) [Amphicoelias fragillimuscompared to a person below, from wikipedia].

* Though usually described (by palaeontologists) as a palaeontologist, Cope was also an accomplished herpetologist and ichthyologist, which explains the name of the journalCopeia.

If history were fair, we would all have grown up familiar with Cope's hyper-enormousAmphicoelias fragillimus, and we would be less impressed by Brachiosaurus andBalaenoptera, let alone with paltry little 20-m long sauropods like 'Angloposeidon' (go here). But it was not to be, and it was to sink into the morass of obscurity. In a major 1921 review of Cope's sauropods, Henry Fairfield Osborn and Charles Mook noted that they were unable to locate the immense vertebra in Cope's sauropod collection (Osborn & Mook 1921), today at the American Museum of Natural History (New York). It was lost.
-Darren Naish
Posted by alisha marie [smiles] at 10:46 AM