squids wash up on beach in california after earthquake

http://www.youtube.com/watch?v=4oc65PHqWrc
Posted by alisha marie [smiles] at 10:26 AM No comments:

Even scarcer than hen's teeth would be ... dinosaur skin.

Dinosaurs died out about 65 million years ago, and skin isn't quite that long-lived. But on very rare occasions, skin or other soft tissue from extinct animals gets fossilized. And that's what happened to a hadrosaur that died about 66 million years ago in what is now North Dakota.

Phillip Manning and the young man who found the fossil, Tyler Lyson, spent years digging up the hadrosaur, funded in part by the National Geographic Society. Paleontologist Manning, from the University of Manchester in England, says he was "gobsmacked" by what they found.

"The tail is three-dimensional, intact. The skin is like a cone of skin slipped over the skeleton; it's beautiful. The arm is just ... it's like shaking hands with a dinosaur, the three-dimensional skin envelope runs all the way around from the hand all the way up to its armpit. It's quite remarkable."

A Remarkable Set of Circumstances

Writing in the science journalProceedings of the Royal Society B, Manning says the skin isn't actually skin anymore — it was mineralized in a rare confluence of circumstances.

The hadrosaur, a 25-foot-long, duckbilled plant eater, died and was quickly covered by water and silt. The mix of chemicals in the water and the dinosaur's own body allowed the quick buildup of calcium carbonate, which enveloped and invaded the skin. Essentially, the skin turned to stone, but kept its form and texture, like a freeze-dried glove.

"You slice through the skin," says Manning, "and you can see original cell boundaries that have been locked in the calcium carbonate cement of this remarkable fossil." From the outside, the skin looks segmented into geometric shapes, like the outside of a soccer ball.

There's More Than One Way To Skin A Dinosaur

Paleontologists have been pushing the boundaries of their science lately, borrowing technology from chemistry and medical laboratories to tease out molecular information from fossilized dinosaurs.

"Our analytical and imaging facilities are becoming much more sophisticated at a very rapid rate," says Derek Briggs, a paleontologist at Yale University. "And that's yielding all sorts of exciting new results about the chemistry and appearance of these kinds of animals."

For example, researchers have recently extracted what they claim are blood vessels and proteins from the inside of aTyrannosaurus rex bone. 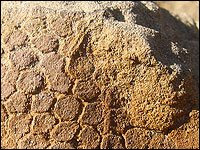 Posted by alisha marie [smiles] at 7:20 AM No comments: